Everything that happened after that passed by in an instant.

The silhouette of the tanned man suddenly became larger. He lifted his right hand up with great force and, the moment she realized that, he swung it down. She could hear the sharp sound of the passing wind by her ears. And then, roughly at the same time, a dull shock impacted against her. Yuna was completely confused. In that moment, her entire body had judged that she was going to be attacked by that unfamiliar man. But the coldness of the ground striking her cheek brought Yuna’s consciousness back to reality.

Right now, Yuna was lying on the ground. The one who had pushed her and thrown himself on top to cover her was– Asyut.

By the time Yuna managed to raise her upper body, Asyut had already brought himself up to a knee and was guarding her against their opponent.

The person who assaulted her was someone who was around the same age as Asyut. He gripped a dagger in his right hand. And he was looking down at Asyut and Yuna with hatred burning in his eyes. There was an unthinkable strength that poured out of him, despite his haggard appearance, but Yuna trembled with fear just from his appearance.

Shouting, the man leapt at them again. Asyut placed a hand on the handle of his sword, but he didn’t move and simply glared at the other person. As the distance shrank Yuna was unable to bear it and gave a small scream. Right at that moment, a thick arm stretched out from behind the man and twisted the right hand of the man strongly. Like that, the man’s body was thrown into the air and then immediately hit the ground.

END_OF_DOCUMENT_TOKEN_TO_BE_REPLACED

The endlessly wide starry sky wrapped around this world equally.

Were her friends and parents – people she could no longer see – staring up at the same moon? While thinking that, Yuna looked up at the night sky, alone. She liked the unique smell of night. The slight moisture that was mixed in with the air made her recall a sense of nostalgia for some reason. It wasn’t a bad thing. Rather, feeling comfortable, Yuna closed her eyes softly. There must be flowing water nearby because the gentle sound of running water passed faintly through her ears and she concentrated on it. –Even though the afternoon was just as quiet, when it became night it was like the world changed and she noticed various things that she hadn’t noticed under the sun.

Leaning against the balcony, Yuna did nothing but continue to look at the scenery. When she thought about how this scenery would be something she wouldn’t be able to look at soon, it became all the more harder for her to avert her eyes. By nature, she had a personality where it wasn’t a pain to stand still in once place for a long time. And this night too, she looked up at the stars and moon for a long time.

END_OF_DOCUMENT_TOKEN_TO_BE_REPLACED

Afterwards, Linus immediately came to retrieve her and, as stated, Yuna spent several days in her room.

The large room was as wearisome as usual, but thanks to Linus’ consideration there were several new things inside the tasteless room. There were various books, ranging from religious texts to the popular, arranged on her bookshelves, and a complete set of lacework placed casually on the table. Most of the books were difficult for Yuna and hard to read and the lacework too was unmanageable for her since she didn’t have experience in the aristocratic arts. Even so, she was grateful for Linus’ thoughtfulness and expressed her thanks in her heart.

The room was provided with a private bathroom and, as long as food was brought in, she could live inside her room without any inconvenience. On this, she was grateful.

Yuna, who had been excused from every ceremony, quickly became bored though and looked around the room. After wandering around the room aimlessly, she looked at the mountain of books. Just looking at the spines made her feel overwhelmed but she managed to pull herself together and pull out one book.

It was a book on the history of this country and the saints. It wasn’t something that was impossible to read but it would take a lot of time to decipher the words and it was a bothersome history book to understand for Yuna. However, it was precisely because of this that it was something she could use to pass the time, and she also wanted to know more about the relation between the saints and this country, so it was like killing two birds with one stone. She was lacking in too much knowledge.

(Ever since the long gone time of myths, there has always been the existence of a saint.)

By the time Yuna, who was carefully reading each page, sighed and reached a point in the book where the events were only 1000 years ago the maids had brought in candles for light. While lifting a cup of brewed tea to her mouth, she found herself unexpectedly astonished at the “deep-rooted” history of the saints.

END_OF_DOCUMENT_TOKEN_TO_BE_REPLACED 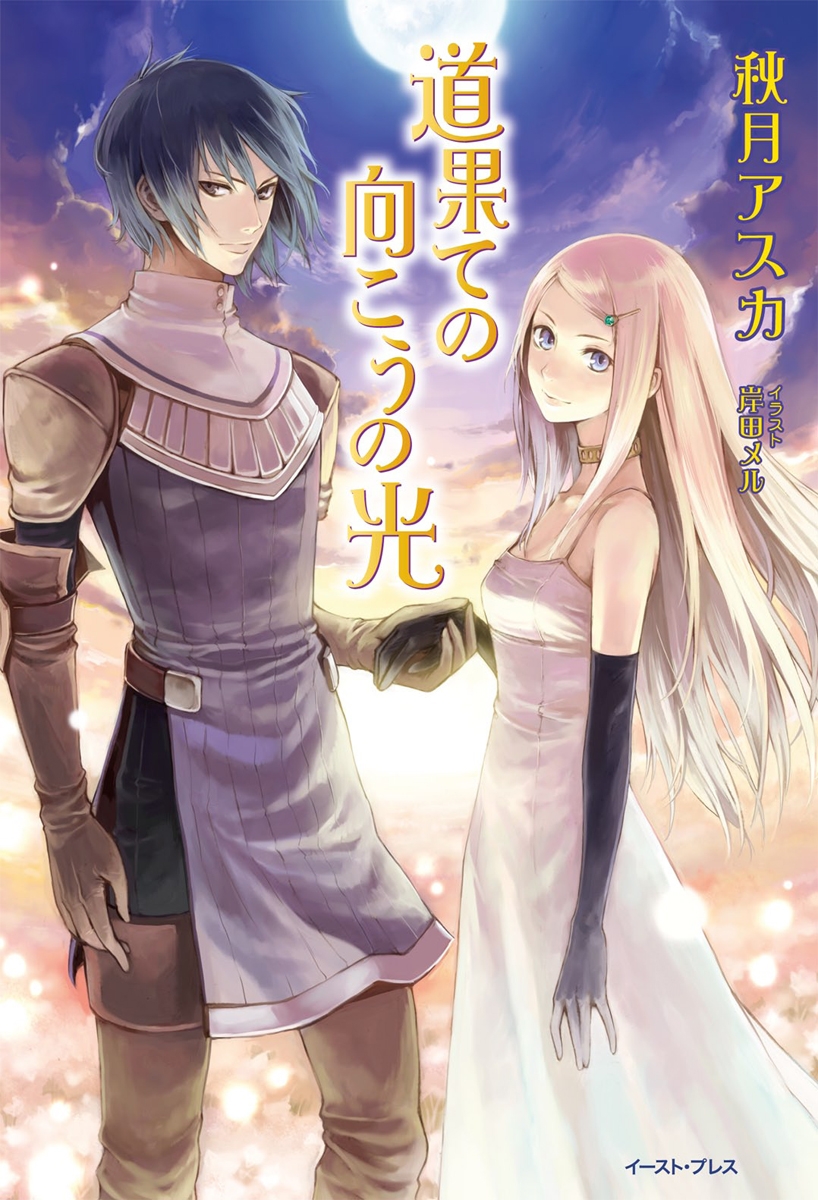 At the sudden sound of unreserved knocks Linus raised his eyes from his book.

Who was the idiot who was violently knocking on his door this late at night? When he went to open the door with an unhappy expression, there stood Celiastina with an even more complicated and sullen expression than him. Behind her was a blond-haired young man that he had the memory of seeing somewhere before.

“Is something the matter? Coming here at this time…”

“I’m sorry, but I couldn’t think of anyone else to ask help from.”

The young girl in front of him appeared to be even more worked up than the time he spoke to her this morning.

“It’s about the Holy Jail.”

END_OF_DOCUMENT_TOKEN_TO_BE_REPLACED

For generations in this world’s only country, Sibelius, it was tradition for the saint, always a maiden, to serve the royal family. There was only ever one of these in the world, an extremely beautiful girl with the Holy Mark on her neck. This was the only proof needed for a saint; it didn’t matter whether she was born as a noble or as a peasant, so long as she had that mark then they were acknowledged by the royal palace and welcomed in. In other words, without the holy mark then one would never be acknowledged as a saint.

Whenever the previous saint drew her last breath, it was a given that the following year a new saint would be born. It was a rule of the country that the saint had to be discovered before she reached her 15th year and welcomed into the royal palace; and, as she entered the royal palace, it was necessary for her to be joined with the young man awarded the position of the First Holy Knight in an engagement ceremony. If this wasn’t done, then it was said that a disaster would befall the kingdom. In the long history of Sibelius, there were only three instances where a saint had not been welcomed into the palace. During the first time, the people underwent a great flood and 40% of the population died; during the second time, the three most powerful forces in the kingdom clashed and all three powers were destroyed in the civil war; during the third, an epidemic had spread and it was reported that 40% of the population had died. Because of these, the entrance of the saint into the royal palace was not just an issue limited to the powers of the country, but a serious event all of the people in the country looked forward to.

END_OF_DOCUMENT_TOKEN_TO_BE_REPLACED

There was a murmuring, pleasant sensation.

It was a little cold, but its gentle and soft caresses against Yuna’s body put her at ease.

Yuna slowly opened her heavy eyes and raised her head a little.

Her eyes were still out of focus but faintly, in her vision, she could see a rock face? Come to think of it, she could also feel a rough and rugged sensation against her body.

Where was she right now? What was she doing?

Little by little, her awareness came to her and Yuna slowly raised her upper body– her body was very heavy. But even still, she somehow twisted her body and looked around the area. It seemed that she was at the edge of a river.

Most of her body was submerged in water and only her upper body was leaning against the moss-covered stones of the riverside. She must have lost consciousness like this. Because she had been in the water for some time, her hands and feet were chilled.

There was a thick forest in this area and, in between the gaps of the tall trees, a black night sky spread. And, as if shying away from the painted black sky, the stars twinkled here and there; the moon could not be seen.

Yuna gathered up her white one-piece dress, heavy with water, and crawled out from the river.

END_OF_DOCUMENT_TOKEN_TO_BE_REPLACED

Light Beyond ~ Chapter One ~

Yuna’s ordinary life was stolen in an instant.

On that day, Yuna was walking on the main paved road, just as she had many days before. She was making her way to the herb market, looking fondly at all the shops lining the street. Shopkeepers acquainted with her greeted her warmly as she passed by, which she returned with a wave of her hand. And just as she rounded the corner, with her slow measured steps.

Something happened to her body.

END_OF_DOCUMENT_TOKEN_TO_BE_REPLACED

The road upon which humans walk has always been short-lived.

As long as they were human, death visited them all the same.

Thus, what befell one girl that day, was nothing removed from the norm.
She simply found herself at her inevitable destination, no more, no less.
But the masses would lament. For a girl so young, death was too sudden and cruel.

“But you won’t stop moving forward, will you. As long as the flickering light beyond the road’s end is within sight.”